Patricia Monaghan's "The Red-Haired Girl from the Bog": Book Review 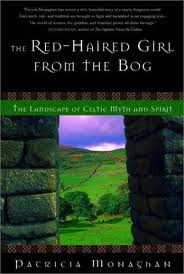 Believe me, I approached this book with plenty of misgivings, given the title and the promotional hints. I do not know how much is savvy marketing--the more academic side of Monaghan's here put forth, as opposed to her being the author of "Wild Women," or the one subtitled "myth, marigolds, and mulches". Her eponymous web domain seems to have faded (when I wrote this in 2005, but now it's back) but looking for information about her as I was reading this, she is noted as a leading popularizer of the Goddess and the reconstructed rituals that rejoin (as in the root of "re-ligion") people to nature. This insistence likewise permeates this 2004 investigation into "the landscape of Celtic myth & spirit."

It's carefully written. I usually "heard" her voice on the page, and as she notes in an aside, I assume that much of what she shares was freshly conveyed in a daily notebook on her travels and through her studies, and then expanded and mulled over much further before coming to print here. I admire Monaghan's determination to excavate using etymology. With a solid grounding in Irish as well as a rare combination of scientific training, her ecologically aware, if persistently soft-focused, depictions of the intermingling of the spiritual, the ecclesiastical, the historical, and the anecdotal make for quite an ambitious product belying the quick title-and-cover glance that casual prospects might give to this if in a New Age bookstore's "Celtic & Druidry" section. More power to her and her readers--they'll pick up more learning and not only lore than they may have bargained for. But you have to put up with, or become enchanted by, visions of she and her pals declaiming Yeats to the wind.

She eschews footnotes but acknowledges any idea or source not her own, and an annotated booklist and source locator appends the book. (Errata: Lughnasa appears also as Lehynasa on p. 273; Kevin Danaher's book was not printed by Cork's Mercier Press in 1922 but 1972--otherwise I found no glaring errors or typos, impressively.) Honestly, New Age is not the first shelf I turn to when seeking books of Irish interest, but you need to be as eclectic and alert as is Monaghan when searching for elusive traces backwards into the "symbiosis" that she posits exists between Christianity and paganism in Ireland, over more than 1500 years.

Other reviews have been more impressionistic, but let me give you a quick view of what in Irish is called "dindsenchas," as Frank MacEowen in his blurb calls "place-bonding stories," that tie toponymy to theology, ecology, and psychology in Monaghan's circuit sun-wise around the island. Beginning in the West, at Gort in Co Clare, she ties her Burren travels to the Hag, or "cailleach." Then she goes to Connemara for the "red-haired girl" and fairies--who are not Disneyfied delightful sprites. Up to Sligo, Mayo, Roscommon on the trail of Medb (Maeve) and the Morrigan, amidst Cruachan, Knocknarea, and holy wells. Then northerly for Emain Macha and Newgrange, with her own theories about a feminized Sun and the Irish ritual landscape thoughtfully told.

A chapter inevitably a bit apart relates her own struggle with the North, and her self-awareness of being seen as the Other. It's clumsier and more self-consciously told, but more direct and reality-based. She confronts her own resentments of those she perceives as eying her differently. It's a bold departure from the rest of the book, and she does not shy away from reality. She cannot offer any new insights, and she probably knows this, but her encounter with her darker side balances her cheerful nature throughout the rest of her travelogue.

I think her musings here about rapacious and/or romantic Viking ancestors accounting for her blue eyes went a bit overboard, and I don't doubt that Monaghan might agree and/or battle me into giving in to her determination to include her reveries--she's that kind of fair-minded investigator--but at least she does not back down from the strength or the fancy of her convictions. This is the model she admires and seeks to project into the Irish past as well as to gain sustenance from the faint but stubbornly grooved and cyclical tracks of its past power for our present. I did wonder at times why [feeling as I read a bit left out; compare neo-paganism, itself about 70% female practitioners] so few men compared to so many women sought to resurrect and rekindle its meanings and symbols, but the feminine-dominated powers, as she argues, gain the prominence even in the old tales and placenames more than males. (As in Ireland-Eriu, the latter meaning "fertile field," a rare point she does not explicitly define here for herself).

Monaghan tends to follow her instinct wherever it leads. She does not avoid the scholarly, but never lets it crush her soul. She has found a much more gentle and inspirational (in the root sense) sacralized landscape than I have encountered in Ireland. She has the advantage that many Irish Americans do not of direct connections and still-connected cousins due to more recent immigration in her family. This allows her more of a base from which to leap out across what she views ahead of her, intellectually, spiritually, and physically, This is a bold attempt to confront what always stoked my own thoughts: how far beneath today's Irish psyche and habits and mentality do you have to scratch before the pagan emerges?

Helped by her ability to navigate pop culture, dictionaries, her own widespread support network of family and friends, and her inbred wanderlust from her being raised in Alaska, she brings her pagan and her Christian sides together most evidently in the visit to the unprepossessing exterior of the re-lit pagan fire for Brigit in Kildare. This joins the two realms in which she and so many Irish, according to her study, wander. Then, down to the sacralized cow, Tara, and the central Uisneach hill for fire ceremonies and Bealtaine. The scholarship dragged a bit more than elsewhere, but coupled with a moving meditation on the death of her friend Barbara, this makes for an honest encounter again with mortality. She points out that it's not the inevitability of death we fear, but its timing.

Finally, she rounds out the tour in Kerry. She did not connect Mis with Austin Clarke's 1970 poem "The Healing of Mis," or cite Emmet Larkin's 1970s model of the devotional revolution of the later 19c that transformed Ireland into the 20c stereotype of a priest-ridden backwater by extirpating many remnants of its folk beliefs, but her thoughts on the pagan sexuality nearly extinguished by a post-Famine Church make for convincing speculation. Danu's "paps" and how its worshipers erected atop her nipples as stone cairns above a gentle-breasted hilled landscape make for a perspective that, as she asserts, only a woman as herself noticed after so many male-dominated studies never had--or at least demurred from recording! In the wrap-up chapter, she and a friend go in search of first-hand folkloric recovery of their own sacred place, Garravogue near the Cavan border. They circle back and extend the circle into a spiral, fittingly, as they revolve around Ireland's own places made holy.

Now, Monaghan has commonsense, more than some who have written about her book credit her with in my judgment as this Connacht-blooded Irish comments to/of another, her family from a point about equidistant from my two family origins only a few miles. By the way, her comments about the inevitable assurance from the locals of "only a mile more" and "sure you can't miss it" ring true for any stranger in search of rural landmarks, ruins, or simply the right road. She remarks on the county-town-parish-townland (she calls the last "farm") narrowing that Irish engage each other with when first nosing about the other's bonafides correctly, as I am of her now. This type of sensible observation, I hazard, makes her more observant and less beguiled by what she ponders in the more ethereal and filtered views she frames--and to be fair she mentions the rain and mud too when they often appear. I learned a lot from her, found that she often stayed one step ahead of me on her associations with the literary and historical and mythic resonances from what she traversed to keep me nimble, and that she wrote sensitively (if a bit too purple-prosed in parts, although these were helpfully often italicized) about her own heartfelt recoveries with the tangible traces of ideas and events long thought intangible.

Skeptics, rationalists, and unbelievers would hate this book, but I prefer, as she does, to think that few actually deny all hope of some presence outlasting our own. This book, challenging in many parts and not all that wince-making in others (these sections are relatively few to her credit), will teach any seeker a lot about facts as well as fable. Monaghan digs into the former to find the latter, and vice-versa.

P.S. A book only published in Ireland, the similarly unfortunately titled "Emerald Spirit," (Cork: Mercier Press, 2003) by another American, David P Stang, makes a wonderful counterpart. John Moriarty's mythopoeic and densely argued work may be too recondite for many, but also may please readers of Monaghan; Clare seanachie Eddie Lenihan's penetrating look into faerie lore and fact, "Meeting with the Other Side," (reviewed by me as are some of Moriarty's books) also is highly recommended if you want more about the play and peril between our realm and that elusive presence still said to swirl about the Irish countryside. Mapped well recently also by Cary Meehan in her "Traveller's Guide to Sacred Ireland" (also reviewed by me).

Slightly revised from my 2005 Amazon US review, as Patricia-Monaghan.com is up again. In earlier form also published by The Blanket as "A book better than its title"  in 2005. Posted to Lunch.com 9-17-10. See my 2007 article that cites Monaghan and other Irish-language learners who come from America to learn Gaeilge in its "native habitat": "Making the Case for Irish through English: Eco-critical Politics of Language by Learners." It's more lively than that title implies.
Posted by John L. Murphy / "Fionnchú" at 1:15 PM

Here's my place for my longer book reviews

My shorter ones, and much more about Irish literature, intellectual and cultural pursuits, academia, trivia, and life, can be found at my brother blog, "Blogtrotter." Visit both! (I'm also on Amazon U.S. under "Fionnchú" in the Top 300s as a prolific reviewer, often of less-heralded books and music. Rate me!